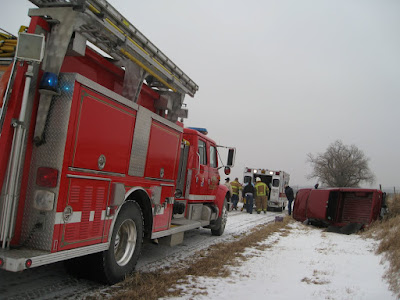 Yes, kids. You most certainly can lose control of your vehicle on gravel when it's ice-covered.
Ed and I came upon this truck in the ditch as we left our house yesterday. We were only 100 yards from our house and completely unaware that it had just happened. As we slowed down a bit to take a closer look I noticed a tiny flashing light in the window when suddenly a face appeared. There was a fellow still inside! He appeared okay but could not open the door that was now on top of the truck so Ed propped the door open and the guy just tumbled out.
It's enough to say that he was all right but here he was with a trach tube, unable to talk to us, trying to communicate with a pen that wouldn't write that he was sick and wanted us to take him to a house two miles further down the lane. Instead, I stayed on the phone with 911 dispatch until four trucks, our volunteer fire department fire truck, two ambulances and two sheriffs showed up. 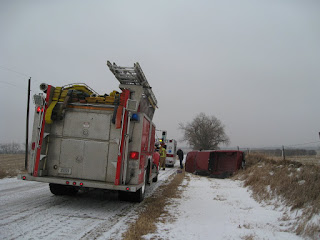 Overheard, the fellow was in withdrawal and needed medication.
Lesson 1: he skidded going UPhill so don't assume that you cannot lose control at any speed and in any spot on the road, gravel or not.
Lesson 2: anybody at any time can be coming at you and cross the road, crashing into you or just the ditch.
Lesson 3: stop and help. Next time it might be you.
Lesson 4: slow down. Next time it might be me. 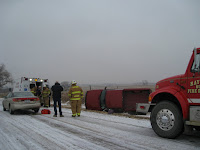 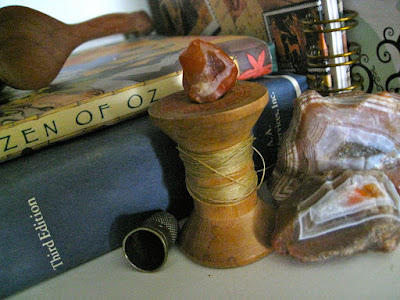 Early last week I lost a dear friend, Roger Pabian, a retired Professor of Paleontology at the University of Nebraska. We first met 12 years ago when I signed up for a jewelry workshop and was seated across the table from him. I was new to Lincoln but my husband was a life-long resident and a fairly high profile guy, having raced locally among other things. As we introduced ourselves, Roger piped up, "You wouldn't be the woman who married Ed Bowes, would you?" Well, yes I would be and he proceeded to regale me with racing stories from 'way before I arrived in Lincoln. From that point on, we were fast friends and saw each other every Saturday night at Eagle Raceway.
I knew that Roger, or Captain Agate as he came to be known, taught a lapidary class and he finally convinced me that I should attend. Saying, "Oh that's all I need, Roger - one MORE hobby", I took the class and was hooked. I now am proud to be able to cut and polish my own stones for my work and I will forever be grateful for Captain Agate's pushing me for excellence. How many times did he make me redo a stone I thought was finished? A gazillion but I learned from the best, I think.
Roger passed away in his sleep last week, far too early in his life as he had just turned 75. It came as a surprise to all of us and it will take a while to sink in. I worked at my bench for a few hours yesterday and could not take my mind off everything he taught me and I had to laugh that his writing was still on the 'spitter' of my lapidary machine telling me 'This Side Up'. That Roger . . . 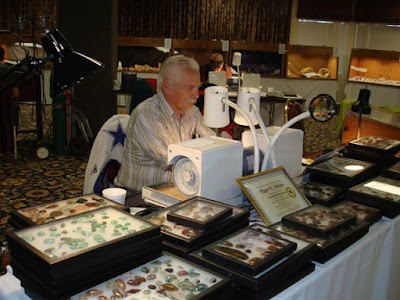 After a long day at Roger's funeral and time spent with those who knew him, I came home to a box on the porch in front of my door. A box full of wonderful things from my friend, Lisa 'Lil Fish Studios'. In the box were two wood boxes which I collect, Minnesota wild rice, pancake mix, honey (oh my, wonderful honey!) and a little Lipton tea tin. Inside - a wood spool and a tiny agate.
Although Lisa had no way of knowing it when she sent it, that tiny agate will become one of my most cherished possessions. It arrived on the day we said goodbye to one of the world's leading authorities on agates and one of my dearest buddies. I'll miss you, Captain, but I'll be able to come into my library and pick up that little Lake Superior Agate and laugh a bit as I remember you, see your eyes crinkle and hear you chuckle as you tell story after story.
Thank you, Professor Pabian. Thank you Lisa. You have no idea what a treasure you sent me, my dear friend.
Posted by lynn bowes at 2:59 PM 5 comments:

Live and in person