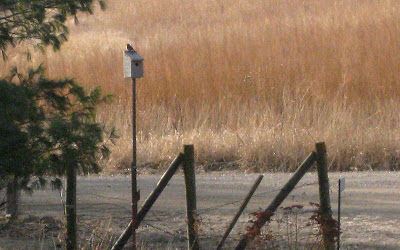 I know these are horrible, horrible pictures but I was standing at the window this morning and just happened to see two bluebirds at the bluebird box.  I got so excited that I choked on my toast!
We have managed to attract bluebirds for the past five years after just a year of trying and I'm always tickled when they return every Spring.  Last year Ink the Cat caught the momma right after the bird had laid three tiny eggs and she brought her straight to me on the front porch.  She was injured but flew out of my hand - I assumed she died later as she didn't return to the box.  I thought we'd lost a brood but - lo and behold - baby daddy entered the nest box himself and soon there were little bluebird babies in that box.  Sad but Nature's grand. 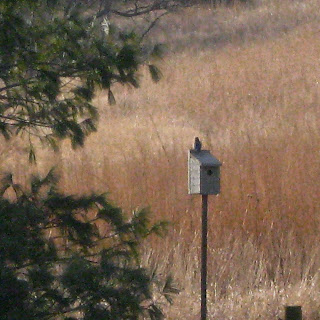 Today while it's warmish I'll clean out the box and make sure no wrens have taken over.  They're feisty things and will keep setting up housekeeping in the bluebird boxes until they finally take a hint and nest elsewhere.  (Sheesh - they have their OWN houses in back by the barn!)
Once established in the box, bluebirds are extremely territorial and will fight off intruders like wrens.  And I'll be watching for bluebird eggs in the next month or so (I think it's kinda early in the season) and hopefully I'll get pictures of those tiny eggs.  Fingers crossed.
Posted by lynn bowes at 8:13 AM 5 comments: 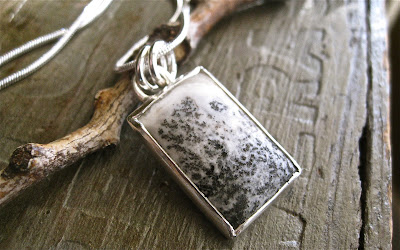 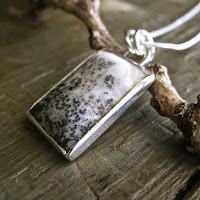 What came out of the Silverwork Fun Factory yesterday?  A handful of sweet stuff, considering that I had a pretty full 'to-do' list this weekend.  I did manage to carve out some bench time to create a bit and that feels good  (Damn you to-do lists - shakes fist.)  Anyway, here you go.

I had a small piece of Dendritic Opal (or common opal as Captain Agate used to tell me - hey, how come HIS stuff was always the good stuff and MINE was just the common stuff . . . ?)  This little bit of material had a good shine when I finished cabbing it but after I set it, I threw it in the tumbler for an hour and it beat away the soft material and left the black dendrites polished - which I discovered I LOVE!  Now it looks like a relief painting of a plum thicket with the small twiggy branches in raised relief.  What a happy accident! 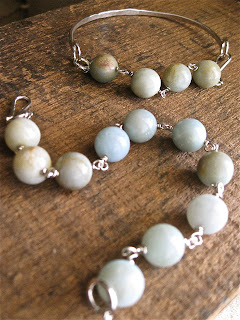 As a 'free gift for ordering' with my last yummy bead order, I received some large medium grade aquamarine beads, typically too large for my taste but I found a great way to work them into some simple bracelets.  Nothing complicated but great everyday pieces and something I wouldn't be afraid to wear while out on the tractor or digging in the garden this spring.
Speaking of gardens, are we all getting our seed catalogs in the mail at an alarming rate?  I'm afraid if I don't order my asparagus plugs immediately, there won't be any left!  Hands off the Purple Passion asparagus - it's mine!
Posted by lynn bowes at 10:29 AM 1 comment: 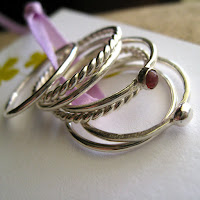 In exchange for a 'naughty' pendant that I had Rachel Two Dog make for me, I made her these stacking rings.
As always, they're sterling silver and I found the tiniest ruby cabochon that I bezel set into the top of one to offset the silver nugget that she asked for.
Love the way these looked on her finger. These are the kinds of trades I love - both of us were winners. 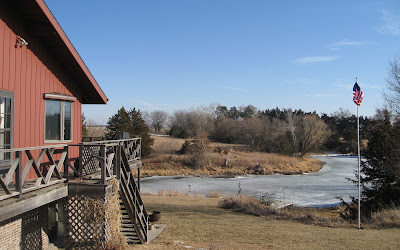 What a great day!

I got to spend yesterday on the gravel lane with Rachel http://twodogpond.blogspot.com/ where Life is Good. Yes, there really is a pond and two dogs. The pond is slowly thawing and it won't be long before the big bluestem grass is tall and the bullfrogs are noisy. 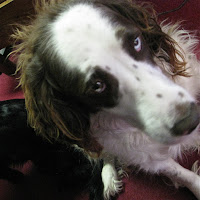 Dog Number One, big old Rumple here has one blue eye and one brown eye and is just happy as all getout to have a guest at Two Dog Pond, can't you tell?  ('Will you get that dang camera out of my face, woman?') You can barely make out Scootch's black butt next to Rumple. Yep, two dogs.
Oh yes, it was a marvelous day on the edge of the Nebraska Prairie yesterday.  It's been so unseasonably warm with temperatures in the high 60's that you just HAVE to stay outside as long as possible.  We drove into town and had lunch at the Corner Cafe, talked about everything from website to new work and the directions we both want to take our art.  It's so wonderful to have a friend you can bounce these ideas off of and I came home majorly energized.  I could hardly sleep last night for thinking of things!
And the truth?  Here's what I love about visiting another artist's studio: 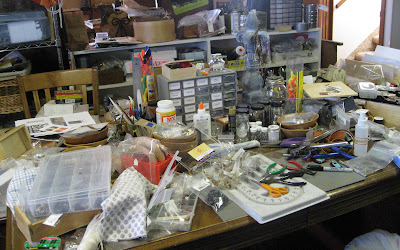 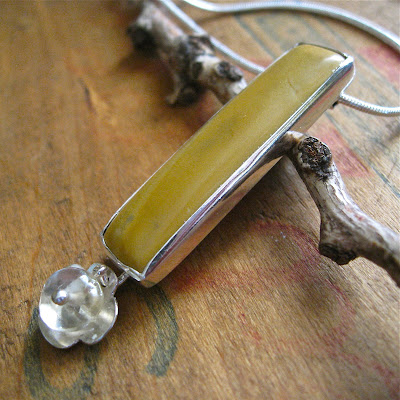 Something about this sliver of jasper makes me want to bite into it.  It's just so buttery and soft and I'll be there are nuts down deep inside.  It's got that Bit O' Honey look to it, doesn't it? 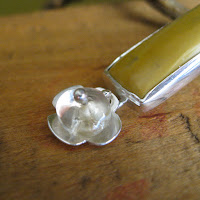 I do like the way the pendant turned out, though, bitten or not.  I cut a little slice of the jasper and softly polished it into a long honey-golden rectangle and bezel-set it in sterling silver, of course.
On the back you can see I've pierced a simple wildflower with a long stem that curls around to the front to hold the pale citrine flower accent. 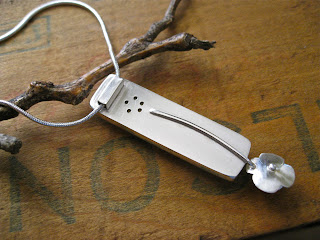 This has such subtle movement and I'm slowly adding to my prairie-inspired collection.  I think I'll wait to show it all at once as a gallery collection but you get to see them as they come from the bench.
Lucky you.
Posted by lynn bowes at 12:36 PM 4 comments: 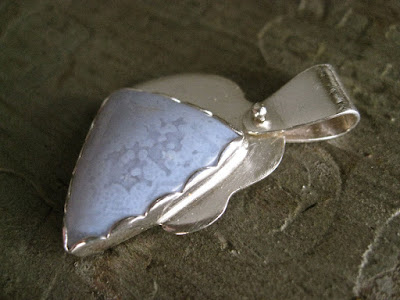 I bought a handful of tumbled Blue Lace Agate tumbled stones at the Farmer's Market last summer thinking they would surely be good for something, sitting prettily in a glass tumbler on the windowsill for several months. On a whim, I took one to the lapidary bench, flattened the back and rounded and smoothed and polished until I had the sweetest little bit of sky blue agate ever.  The dotty patterns emerged so perfectly! 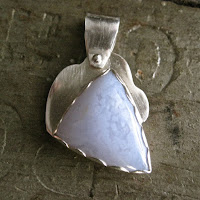 This stone has the pale, faraway look of a Spring sky, dotted with high puffy clouds, what we call around here a buttermilk sky. I set it in sterling silver with soft lines, a cloudlike line surrounding the scalloped bezel and hung it with a softly rounded pinned bail so it swings gently hung around your neck.
This lovely little pendant is just another of my developing series of work inspired by the Nebraska Prairie landscape. More to come and certainly more of the Blue Lace Agates. I have a windowsill full.
Posted by lynn bowes at 7:58 AM 1 comment:

A Triumph of Lichen revisited . . . 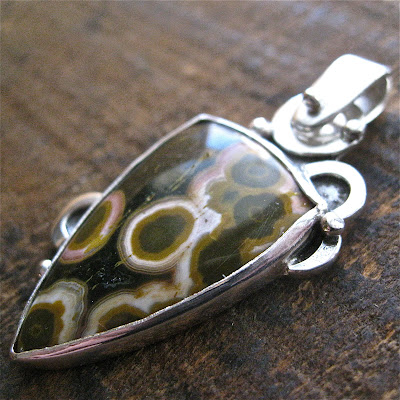 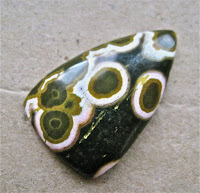 Maybe lichen isn't the word I'm looking for here. Maybe fungus is the word but that makes for an icky title for such a lovely stone.

Ocean Jasper is always gorgeous and I blogged about this little bit last week when I was finally able to get back to the lapidary bench for a few hours.  I turned out this stone and a handful of others that will slowly make their debut here in the next few days.

The patterns in the stone remind me so much of the roundish mold or some sort of fungus that grows on fallen logs and sometimes the side of the barn.  You people who read this and know what I'm talking about, please straighten me out as to what this is called.

This stone begged to be set with circle accents and it turned out particularly well, I think.  Okay, I had some issues with it but in the end, I like it.
Posted by lynn bowes at 6:29 PM 3 comments: 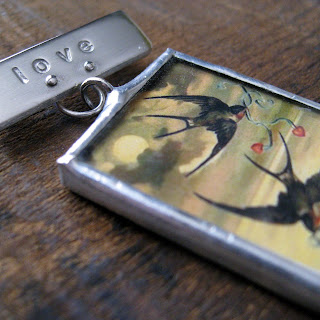 My darling, super talented and cute friend Rachel twodogpond.blogspot.com posted the sweetest picture for her weekly blog giveaway with two little swallows (very important here) and asked for her readers to post a caption.  Well, the first thing that popped into MY twisted mind when I saw these two little swallows was . . . well . . . here's what I came up with and she kindly looked beyond my naughtiness and sent me two. 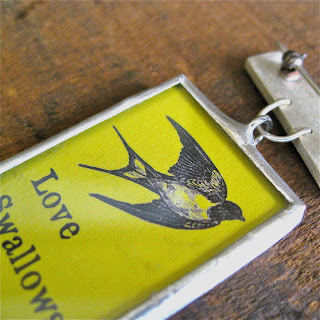 I turned these into pins and sent one to my buddy
Stella Sue - who gets me. 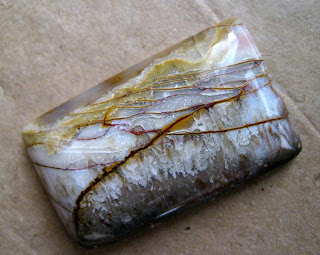 Now it's getting fun.  I was digging through my slab stash and came across a little bit of what I think is probably Crazy Lace Agate.  A leftover of some sort - I'm always finding interesting bits in throw-away bins at Gem and Mineral Shows and this is one of those.
Polished nicely, this little darling reminds me of the field across the road, still winter-covered in snow with gray and gold Big Bluestem grasses poking up through the snow and a rusty barbed wire fence between me and thee.

Can't you just picture a brooch?

And a leftover, leftover - more than a bullet.  A Crazy Lace Coyote Tooth . . .

Every mouse deserves a chance . . . 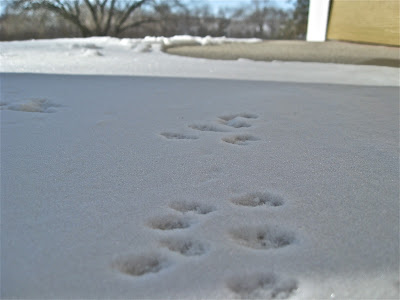 I'm a softie.  I keep heated bowls of water on the front porch, the back porch and in the barn but I'll be the first to say these are really for the cats - ours and an occasional raccoon or opossum.
However.  As I was sweeping the snow off the front porch this morning (yes, it was not yet zero degrees), I notice the tiny footprints leading up to and around the water bowl.  Mouse prints.  Darling little mouse prints.  Now I feel like I should provide a tiny ladder and a rock in case someone slips and falls in.
Yep.  Big time sucker. 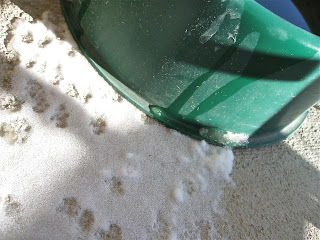 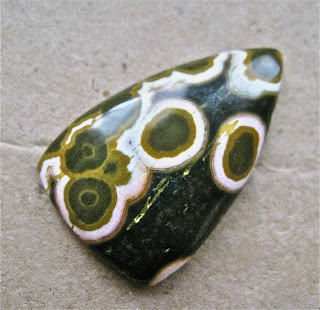 Yes, a Triumph of Lichen.  No matter how severe the winter, lichen survives.  This Ocean Jasper reminds me of the lichen that clings to every tree, rock and occasionally, the farm truck and tractor.

I plucked this little slab-ette of Ocean Jasper from my overflowing kit of bits and pieces and polished it into this sweet cab yesterday.  Destined to become the first of my Prairie Collection - quite possibly a pendant but I haven't decided yet.  Still, my lovely little Triumph of Lichen, you inspire me.
Posted by lynn bowes at 10:13 AM 6 comments:

Live and in person